Lobbyists opposed to wind energy often claim that wind turbines are harmful to the bird population. According to them, wind farms that are built along bird migration paths or in bird habitats kill an outrageous number of birds. However, the fact is that millions of birds are killed as a result of other human activities, some of which may be mitigated by the construction of wind farms.

As a matter of fact, ending power generation using fossil fuel and instead using wind farms could save up to 70 million birds every year. Compared to other forms of power generation, wind farms have the least effect on the population of birds and other animals. In the grand scheme of things, wind farms are beneficial to the bird population.

It’s practically impossible to generate power on a massive scale without causing some damage to wildlife and biodiversity. Power generation using natural gas, oil, coal, nuclear material, water, and wind, will inevitably impact the environment in a negative way. There is often a threat to the survival of certain species in the given region, but the threat has a geographical limit. Wind farms are unlikely to cause a decline in biodiversity or to threaten endangered species.

The impact of fossil fuel plants compared to wind farms 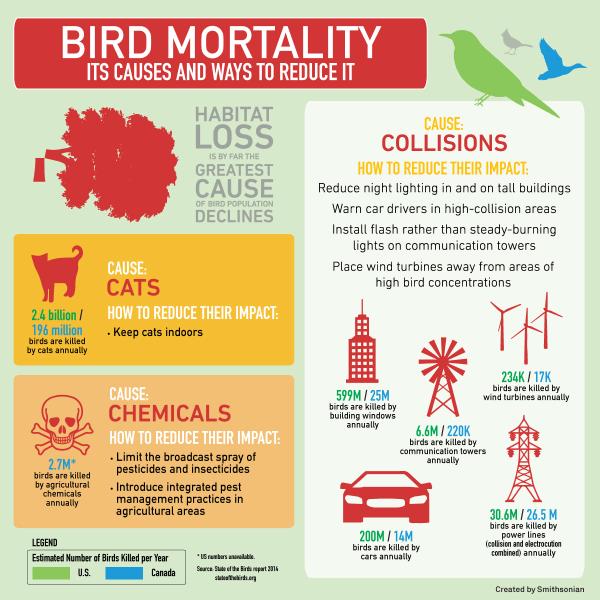 Wind farms versus other human activities

Wind turbines kill between 20,000 and 33,000 birds a year in the United States, which means they probably kill about 150,000 birds worldwide every year. That is almost insignificant given the fact that close to 1.5 billion birds die every year. Lobby groups opposed to wind energy often exaggerate the number of birds that are killed in turbines for their own interests.

A 2009 study using European and US data on bird deaths estimated the number of birds killed per unit of power generated by wind, fossil fuel and nuclear power systems.

In other words, for every one bird killed by a wind turbine, nuclear and fossil fuel powered plants killed 2,118 birds.

Innovations in the wind farm industry

Researchers in the wind industry are coming up with innovations to help reduce the number of birds that die in wind turbines. So far, they have come up with a few promising solutions, including painting turbine blades with colors that are unattractive to birds, and using radar to assess the behavior of birds in the vicinity of the wind farms.