THE BELOVEZHSKAYA PUSHCHA PRIMEVAL FOREST IN BELARUS IS IN DANGER!

In the second half of last year alone more than 100 000 cubic metres of valuable wood were logged in Belovezhskaya Pushcha. More than 300 hectares of forest! 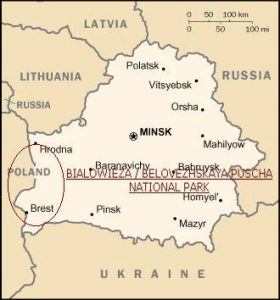 THE NATURAL RICHES OF THE NATIONAL PARK

Situated on the watershed of the Baltic and the Black Seas, this immense lowland primeval forest range is home to some remarkable animal life, including rare mammals such as the wolf, the lynx and the otter, as well as some 300 European Bison Bison bonasus, a species which has been reintroduced into the region.
As in the Polish part of the national park between 170 – 200 bird species breed here with owls and woodpeckers among the specialities. The owl species present include Eagle Owl Bubo bubo, Ural Owl Strix uralensis, Pygmy Owl Glaucidium passerinum and Tengmalm’s Owl Aegolius funereus and the rare Great Grey Owl Strix nebulosa is present some years. Hawk Owl Surnia ulula and Snowy Owl Nyctea scandiaca have also been recorded as vagrants. Read more here…

…. AND THE THREAT TO ITS SURVIVAL

Although the forests have been under protection since the end of the 14th Century, and were designated a World Heritage Site in 1992, increased economic pressures in the former Soviet republic of Belarus , such as soaring inflation and lack of funding create pressures to intensify commercial and economic activity. The sawmill located within the reserve, which was initially installed to handle dead and damaged trees, is now increasingly being used to destroy the natural regeneration of the forest which is being irreversibly destroyed through intensive logging and skidding of timber. Man-made plantations, including species foreign to the Pushcha, threaten the character of the previously virgin forest.

The government and their appointed managers have ignored the protests of local people and conservationists; and journalists attempting to throw light on breaches of conservation laws and dubious practices by the forest management have been prevented from communication with forest workers and local residents. More recently they have only been permitted to visit the reserve under escort! More information here …

WHAT YOU CAN DO!

The key figure in the decision-making process in Belarus is President Lukashenko. The management of the National Park is directly responsible to his office.

Send a letter, telefax or email of protest to the President of Belarus, Alexander G. Lukashenko and also to The Minister of Natural Resources and Environment Protection Leontiy Khoruzhick.
A draft text, taken from one provided by Ukrainian conservationists, is supplied below. The President can only be mailed via his website and the Environment Minister via the link SEND DIRECT MAIL below. You can alternatively use the the addresses given here.

For those with time to compose their own texts see a short guide for Proact campaigners.

ACT NOW FOR THE CONSERVATION OF THE BELOVEZHSKAYA PUSHCHA

The natural resources of the Belovezhskaya Pushcha National Park are the property of the whole of the Belarusian nation, and further held in trust for the rest of mankind as a World Heritage site. The national park is also an inseparable homogenous part of the adjoining Bialowieza National Park, forming a biosphere reserve in the hydrological divide between the Baltic and Black Seas. The integrity of this last remaining European lowland primeval forest is of great importance to the biodiversity of a region extending well beyond the borders of your country.

Since the management of the Belovezhskaya Pushcha was transferred to the presidential administrative department, intensive commercial activities have been introduced which are incompatible with its environmental status and which subjects the survival of the forest in its present form to an unacceptable risk. These commercial activities also contravene your own legislation, the law on “Specially Protected Natural Areas and Objects” and ignores all scientific tenets of wildlife conservation.

We therefore urge you to introduce urgently the following measures for the protection and long term sustainability of the natural resources of the Belovezhskaya Pushcha National Park:

1. Stop the wide-scale logging of timber which is gradually destroying the structure of the primeval forest.

2. Remove all responsibility for the promotion and execution of large scale commercial activities from the remit of the present and future National Park management.

4. Limit commercial activities within the boundaries of the National Park including its buffer and transition zones to those strictly compatible with environmental legislation and existing scientific nature conservation guidelines.

5. Institute the long postponed drafting and implementation of regulations for the National Park in conformity with national and international environment protection legislation. This should be a public process permitting the involvement all Belarusian citizens.

We hope that you will see fit to introduce and implement the above measures as soon as possible. It would be tragic if this unique European natural resource, which has sustained its biodiversity as a result of 6 centuries of protection, is irrevocably destroyed in less than the course of a single generation.