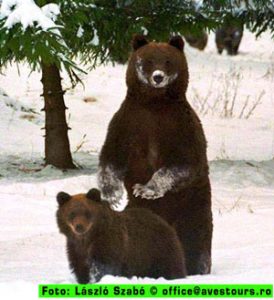 At the urgent request of the AVES Foundation for Protection of the Birds and Environment in Romania, I agreed on PROACT’s behalf to publicise their campaign to save the Brown Bear population in the Romanian Carpathian mountains from extermination.

AVES is an independent and nongovernmental civil organization. Its main aim is the protection of birds and their habitats in Romania; but its activity also covers other public environmental protection matters. The foundation was established in 1997 but existed illegally and underground since 1972 during the Ceausescu dictatorship.

Campaign to save the Brown Bear (Ursus arctos arctos) in Romania from extermination.

The causes for this loss are incompetent and lethargic game management by the responsible authorities; corruption at all levels and a lack of interest by central government.

With a bear shooting licence costing 7,000 Euro (mostly of course for European hunting tourists), those who manage to divert a part of the spoils into their own pockets are eager to sell as many licences as possible. This leads to deliberate manipulation of population figures. In the Harghita region, where AVES has carried out a detailed survey, the official shooting quota is ten times the figure based on accurate population estimates by AVES; which will bring in over half a million Euro in revenue!

For more information see:
PRELIMINARY REPORT ON THE STATUS OF THE BROWN BEAR

How can YOU help AVES with the Brown Bear campaign

AVES believe that pressure must be put on the Romanian Government both directly, and through local and international news media, to act in this matter and comply with international conventions on the protection of threatened species. In addition, as Romania is an applicant for EU membership in 2007, the EU Commissioners and European Parliament should be lobbied to encourage Romania to begin harmonisation and implementation of environmental standards in preparation for their accession to the EU.

A draft text is available below. Send it (or one expressing your own concerns and suggestions) via the link provided the President, Prime minister and responsible government ministers; the Romanian news media and the EU Commissioners for the Environment and Enlargement Margot Wallström and Günter Verheugen.

Use the parliament address link to get contact details for your national or regional MEPs and write, mail or fax them as well.

Mismanagement and excessive hunting of the Carpathian Brown Bear (Ursus arctos) over the past 14 years have led to a tragic decline in the population in Romania.

From a stable and viable population of 7,780 individuals in 1989, only 1,800 – 2000 Brown Bears survive today in Romania. Illegal and barbaric killing methods, sanctioned under the bloody Ceausescu dictatorship, and prohibited by European laws and international conventions, are still widespread and are tolerated by the authorities. Romania is a signatory to the respective international conventions; but there is pervasive corruption among the responsible authorities and the pursuance of personal financial interests in the short term is considered to be more important than conservation. Unless something is done it is probable that, by the time that Romania accedes to the European Union, the Romanian Brown Bear population has become, or is on the verge of, extinction.

We therefore urge all those responsible in the Romanian State, and the European Commission and members of the European Parliament, to work together with the competent institutions of the Romanian Government to implement urgent and effective measures to stop the illegal hunting of the Brown Bear and other mammal predators. It is in the common European interest to ensure that Romania brings its rich natural biodiversity as intact as possible into the European Community and to ensure the survival of endangered species for forthcoming generations.

In the hope that you, together with the Romanian and international news media, can contribute to the conservation of this fine animal we remain,

in support of the Aves Foundation campaign http://www.avestours.ro/ursusarctos/