Trapping and transport of Greylag Geese on Texel in June 2008 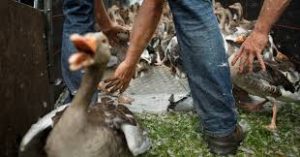 Dutch conservationists publish a video film of the trapping operation

During June and July the authorities on the Dutch North Sea island of Texel contracted out to a firm the trapping and gassing of thousands of wild geese. Local conservationists have monitored the operations and describe it as an unprecedented wildlife protection scandal. Observers from the Committee Against Bird Slaughter CABS and the Dutch wildlife conservation organisation Faunsbescherming have reported that workers of the Duke Faunabeheer trapped some 3,000 birds in 6 separate operations, loaded them onto lorries and transported them to an unknown location. The scandal has now spread to Germany after it has become known that the birds gassed on Texel have now been sold to a German slaughterhouse. The local newspaper ‘Leeuwarder Courant’ reported in a recent issue that the birds are to be used inter alia for the production of Foie gras in Germany.

The reasons given by the Dutch provincial administration Noord-Holland for the slaughter in the Wadden Sea is damage to crops from grazing by the geese. Last year the cost of this damage is said to have amounted to some 90,000 euros. In order to help the affected farmers the responsible authorities plan to kill some 6,000 Greylag; White-fronted and Barnacle Geese this summer. In one operation some 350 birds were trapped and killed in a bird protection reserve near the village of Den Burg. Biologist Axel Hirschfeld of CABS criticises: “This form of brutal interference, carried out in a nature reserve, is ecologically ridiculous and, from an animal protection viewpoint, a downright disgrace”. He believes that alternatives such as providing food sources away from growing crops or provision of financial compensation for the farmers have not been seriously considered by those responsible.

Despite international protest the operations continued into mid-July, when over 1,000 Barnacle Geese were trapped, moved to another location and gassed. This latter operation, involving trapping, herding and brutally loading the geese into trailers, was filmed by Dutch conservationists. the four minute video film (27.6 MB) can be seen at www.faunabescherming.nl

(The page is in Dutch only: on the start page click on the title “klik hier voor de reportage met foto’s en video” under the picture. This starts the download)

WHAT YOU CAN DO

SUBJECT: STOP THE UNNECESSARY KILLING OF GEESE IN UTRECHT AND TEXEL

It was extremely distressing to hear that the state forestry department has given the firm Duke Faunabeheer permission to trap and gas Greylag, White-fronted and Barnacle Geese on the island of Texel and in the province of Utrecht.

I wish to protest emphatically against this unnecessary slaughter and will for my part ensure that the brutal methods used and tolerated by the provincial authorities are made public.

I demand that you put an immediate stop to this meaningless killing.